The first RSE conference in the Netherlands was held Wednesday 20 November 2019 at the Johan Cruijff Arena Amsterdam!

Niels gave a brief status update of NL-RSE and some announcements. Niels explained how important it is to have an RSE conference. As part of this academic career Niels has visited many computer science and domain science conferences, but when visiting the first RSE Conference in the UK in 2016, he suddenly realized that this conference was the first that he had ever attended that was actually organized for him!

Back at home, Niels wasted no time and started forming a group of people to found NL-RSE, which finally happened in April 2017. Today, NL-RSE represents 179 Research Software Engineers from over 35 different organizations in the Netherlands.

To keep NL-RSE going, we need more volunteers to join the core team! The core team is responsible for all of the organization of NL-RSE and organizing events like the NL-RSE19 conference. Please send an email to info@nl-rse.org if you’re interested in joining the core team.

Tania Allard, RSE in scientific computing and machine learning at Microsoft, RSE Society trustee, and diversity chair at the UK-RSE conference this year, gave the keynote presentation titled “IMPLICIT NONE: Intentional inclusion and diversity in the RSE movement”. 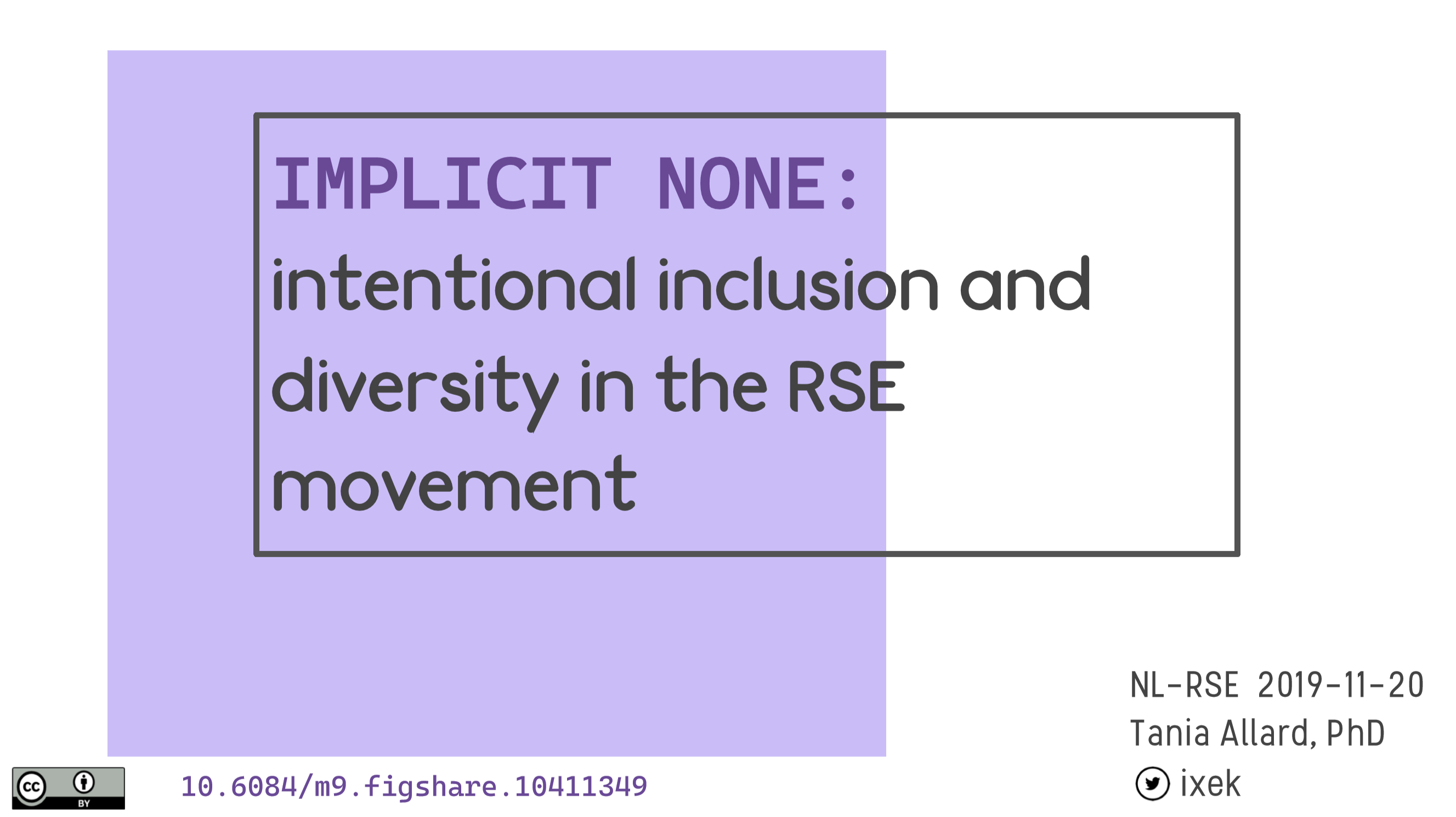 Tania started by explaining that the RSE movement takes the broadest possible definition of the Research Software Engineer. Anyone who identifies as such can consider themselves an RSE, whether you are a researcher who codes, a developer who conducts research, or someone who studies research software.

Tania also explained that, in general, the role of the RSE within academia is much broader than a researcher who codes or a coder who researches. In addition to developing software, RSEs build communities, manage projects, innovate, teach and mentor others, manage data sets, and conduct research, but they are sometimes also activists, and outcasts within the academic landscape. In general, there are many more people important to academia than the subset of people that are considered Academics.

It does not matter where you are on the spectrum between software engineering and research. Ever since the RSE movement started, there has been the opportunity for people to self-describe as RSEs. The International RSE community promotes inclusiveness and values diversity.

After the keynote, we broke off into parallel sessions, featuring many different talks with a nice balance between RSE community and technology-focused contributions. See the NL-RSE19 event page for the program and slides of most presentations.

Comments from the participants

During the day, many lively discussions took place. Most live, some online.

So proud to present our results on comparing solutions to collect historical tweets in #NL_RSE19 pic.twitter.com/GiHzTDQnFN

Brilliant talk + demo about open science and literate programming by @jhidding. Nice to find people sharing my interests/obsessions at #NL_RSE19

We would like to thank everyone who helped in organizing the conference, in particular Sacha van Breugel, and Carlos Martinez Ortiz and Mateusz Kuzak who unfortunately couldn’t be there, as well as all the volunteers that helped out during the day!

After a successful conference, it makes sense to look ahead to next year’s conference and the period that lies in between. Next year, we hope to further grow the NL-RSE community, find more volunteers to join the core team, organize another conference (NL-RSE20), and create a more formal organization for NL-RSE! If you’re interested in helping us make this happen, please let us know at info@nl-rse.org!